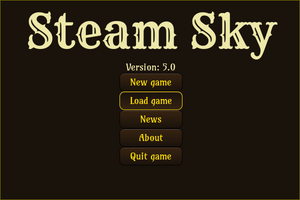 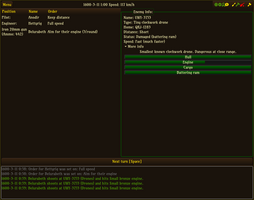 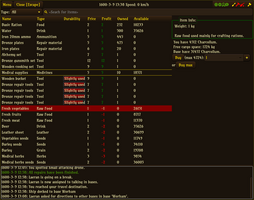 Finally, after a few months of work, the new big, (let's hope) stable version of the game arrived. This version contains a lot of changes since 4.0 series. Some of them are small, some are real rule-breakers. Below are just a few of them:

If you want to see all changes since the last release of the 4.0 series, please look at News in "Show all changes" state in the main game menu.

I want to thanks everyone who helped create this version - thank you very much for your opinions, bugs reports and propositions. Thank you for made the game a better :-) I also want to apologize everyone who ideas don't appears yet in the game. I promise to try add them as soon as possible.

And now a bit about future work, at least in short term:

The biggest chance planned for the next big stable version of the game (at least at this moment) is mayor overhaul of the User Interface. Current UI were designed at beginning of the work on the game, when it was console based and there were a lot less items, things to do in the game, etc. With time UI got some updates but now definitely it need a lot of work to be more friendly and intuitive. Additionally, from the developer point of view, I'm very disappointed with library used for the UI - GTK, especially with it "cross-platform" ability (or better, almost lack of it) and plans for it future. Thus I decided that work on new the game UI I will start from replacing GTK library with another: Tk, which works better on different operating systems. Of course, this will take some time, thus probably version 6.0 will arrive later than normally it should. Generally, plan for the next two development release is:

And the next releases we will see what they brings.

And again, thank you very much for your support, enjoy the game and let's hope that this time will be less bugs than with 4.0 version :)

Text-based roguelike in a sky with steampunk theme